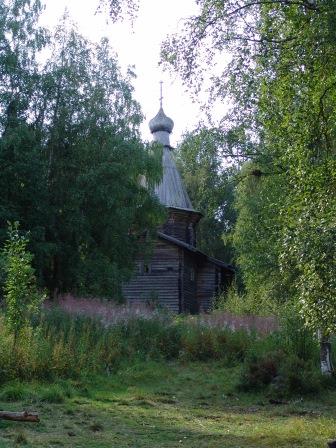 We offer you excursion to Troitsky (Trinity) Island on Muezero lake. There are St. Nikolai church (1602), chapel The Holy Face (1672), chapel St. Kassian’s relics and Old Believers' cemetery, where are graves of the 19th century. 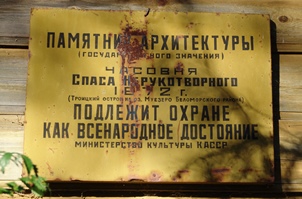 Metropolitan Makary had written in his book “The history of the Russian Church” the monastery on the Muezero lake named in honor of Saint Resuscitating Trinity had been built around 1591. The founder had been the Reverend Kassian Muezersky who was canonized in XVII. The monastery is located on island Troitsky (Trinity) on Muezero lake. In accordance with the legend the Reverend Kassian had been made a monk in Solovki monastery and reached Trinity Island from Solovki by granite plate.

Some mystic legends narrate about St. Nicolas the Miracle-Worker Church reconstruction. The workers drunk a lot. Near the Church there was the Reverend Kassian’s granite plate. The fire restorers made on that plate was the reason of the plate damage. The same night some restorers were getting mad, another run to the nearest village with screams. They looked very frightened and could not explain anything. The some parts of the plate after those events disappeared. There was footstep. Some told it was of Kassian’s, another – of the Angel.

St. Nicolas the Miracle-Worker Church (1605) which is extant was composed of Muezero monastery, but that Church was not the Cathedral one. There are hardly seen base of the Trinity Cathedral base and stone well.

St. Nicolas the Miracle-Worker Church could be scarcely seen from the lake side. It’s surrounded by old birches and venerable pines. For a long time the dome was the excellent visibility object for fishermen and hunters and the Cross on the dome had been seen for kilometers. 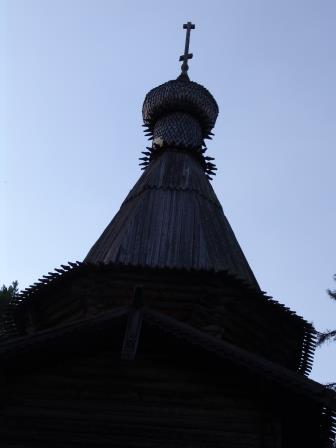 One window of the refectory is with frame window, three another are without. Evidently the Church had been used in the summer time, because there were not stove signs. No nail construction of the dome had been completely saved. 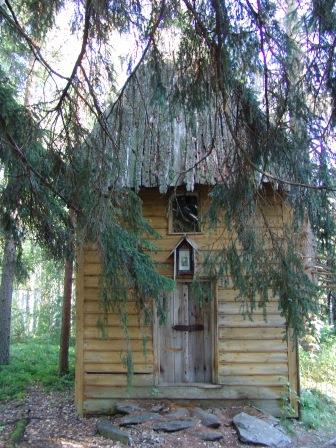 The Holy Face chapel had been built near the St. Nicolas the Miracle-Worker Church in 1672. By the enter lies the piece of the Kassian’s plate, another plate patch lies not far, in the pines roots. Invoke crosses amaze with their sizes – around 4 meters. Surfaces are painted with bright colors: blue, crimson, gold. On crosses somewhere could be read epitaph in Church Slavonic: “Let God arise, let his enemies be scattered”.

Reverend Kassian’s relics are near the Chapel. The wooden shrine had been kept safety. That looks very simple and ascetic.

Here is Old Believers' cemetery. Crosses are with copper icons of Saints and Patrons of the deceaseds. The earliest graves are dated on 1859.

The atmosphere of the Island is full of mystic and silence. 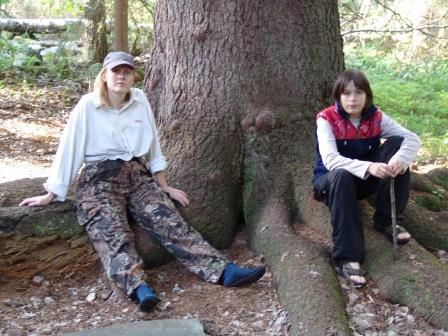